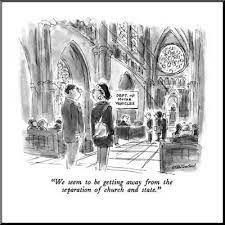 In 2015, Kim Davis, in her capacity as county clerk, denied two male couples marriage licenses to which they were legally entitled. They sued. That case is now working its way up the legal ladder and will no doubt finally end up in the laps of the partisan hacks of the Supreme Court.

Apparently, Davis, a self-described “Christian”, claims the right to deny rights to others based on her own religious convictions.

According to MSNBC, her case has “profound First Amendment implications.” But does it?

If Kim Davis has religious objections to so-called interracial marriage—and it’s not so long since lots of people like Davis did—does she have the right to deny a marriage license to an interracial couple?

In fact, Davis and her case have no implications for free exercise whatsoever. If her fundamentalist Christian beliefs mean that she cannot in good conscience issue a marriage license to a couple who are legally entitled to marry, then she cannot hold the position of county clerk because she is not qualified to hold the position. A Mormon or Muslim cannot be a bartender if his religious principles prohibit him from serving alcohol to others. If you can’t do the job, you don’t get the job.

Shared by: YouTube
Youtube allows and encourages 3rd party display of Youtube videos.  Commercials are still shown.  Monetization still takes place.  Content creators can block 3rd party display, but since 3rd party display increases revenue and views, why would they want to? For more information on this content visit our About Page and find the content type.