All Feeds | This Feed | Website | Feed Source | About Syndicated Feeds 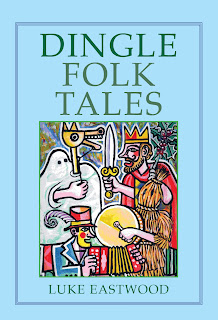 Luke Eastwood is druid and a prolific author, particularly of books about Irish folklore. Dingle Folk Tales is his second collection of stories from Ireland, following Kelly Folk Tales. I chatted to him.

Q: What interests you about tales from Ireland? Does this relate to your background in Druidry?

A: It’s not essential to modern Druidry, however the bardic arts would be a major component of the Druidic path both in ancient times and in the neo-druidic movement. Geaneology, wisdom tales, songs, poems and histories would all be part of the cannon in the past, with a massive amount of memorization required. Today the learning by heart is not a requirement,  which suits me as that is not one of my  strengths.

Nonetheless, the creative arts are vitally important in druidism and story-telling is significant part of that, especially in Ireland. The Seanchaí (bearer of old lore), Seanchaidh in Scotland, is a role that still exists in a less formal way within society – with people telling stories in houses, at funerals etc to this day. In the modern Druid movement it is a distinct role as a story-teller of lore, the mythology, most commonly told from memory.

I’ve always loved stories, reading and mythology, I grew up hearing and reading stories of the British Isles, Rome, Gaul, Greece and the Vikings and I accidentally stumbled across Egyptian mythology in a library and loved it immediately. Sadly, I am not the best at remembering all the elements or names in a story, I have to sometimes use a flashcard or post-it to remind myself! If I can remember where I am and all the key names I can usually manage a decent tale, but I find they are always slightly different as I will ad lib around the main story.

Q: Which are your favourites from your book, and why?

A: I found the Ryan’s Daughter story a  lot of fun, not least of all the scandalous goings-on of Robert Mitchum during the filming around Dingle, some of which was very amusing indeed. I also loved the story “The Leprechaun and The Old Couple”, which is another very funny, although very short story. A more serious one is “Inis Tuaisceart”, about the most northerly Blasket isle, which serves as somewhat of an environmental horror story, a warning if you will, of what happens when people are stupidly greedy and destroy their own means of living.

Q: What do you feel is the importance of storytelling in general, and folk tales in particular?

A: Real physical culture is more important than ever in this ages of virtual communication. There’s nothing like sitting under the stars by a campfire and sharing stories, poems and songs. It’s very direct and real and can often be quite touching, sad or joyful and emotional. It feels  to me like we are losing the ancient culture and connection with the past to an armada of technology. Personally I don’t think it’s a good road for humanity, although on the flip side it can connect people who are in far away places or people who are isolated by disability, lack of money etc, so that they can also join in or watch. I guess  it’s  how you use the tech that’s the key here and if it can be used to keep traditions and knowledge alive then I guess that’s a good thing. 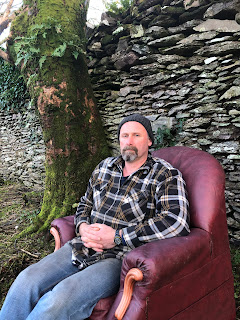 Q: How did you go about collecting and editing the tales for publication?

A: It took me 2 or 3 years to collect all that’s in this book. I had to stop somewhere as there were so many possibilities, otherwise this book could have ended up 1,000 pages and taken over a decade! I was lucky to meet many people who were either directly involved in some of the more modern stories or who had connections with the places or people in the older stories. I also had access to some old books as well as the Dúchas Schools Collection from the 1930s. I tried to get a good mixture of the ancient mythology,  stories from the past few hundred years and also modern stuff – such as Fungie the dolphin.

Q: What advice would you give to people who wanted to explore the folk tales of their own area?

A: I guess the most obvious places to start are seeking out old people and visiting your local library. Often librarians will prove to be useful (they were for me) and many older people may either remember interesting stories or know an older person who has an interest in history and/or mythology. A lot can also be gleaned from mythology books if you don’t have anyone to physically ask for stories.

Q: Are you working on any more anthologies or other writing?

A: I’m working on an illustrated children’s book (with Elena Danaan) and also a photographic book on sacred sites in Ireland. That’s also a collaboration with a photographer, which will hopefully result in a large format book, with some historical lore/info to accompany the images. These are both long finger (put-off) projects  that I’d like to complete  this or next year, but I am trying to avoid starting anything completely new for a while.

Q: Is there anything else you would like to say?

A: Recently I’ve come across quite a few artistic people who are now doing okay or very well despite a slew of rejections and disheartening events in the past. Being artistic is not easy and you really need to have confidence in your abilities if you’re ever going to succeed. Of course, you need to be realistic about your potential but, at the same time, not be deterred by all the nay-sayers. At the end of the day, most of these people who judge you harshly or hold power over you have money and profit as their primary motivation and are often the least qualified to judge authenticity, passion and talent. If you can remember that and not let the industrial/corporate paymasters undermine and dishearten you, then you have some chance. Even if you do fail, artistic endeavours are worth doing for their own sake anyway!