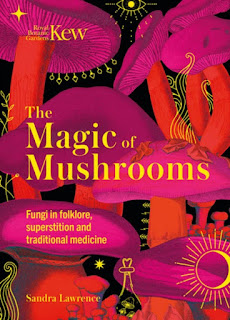 This glorious picture is the front cover of a new book, The Magic of Mushrooms – Fungi in Folklore, Superstition and Traditional Medicine by Sandra Lawrence. Written for The Royal Botanic Gardens, Kew, it contains beautiful colour illustrations as well as a wealth of information. The blurb on the back invites you to “immerse yourself in a bewitching world” and discover more about these amazing forms of life that are in some ways more like animals than plants:

“At the centre of countless superstitions, folkloric tales and magical beliefs, as well as appearing in recipes and medicines both traditional and modern, mushrooms have incredible powers.

“Featuring images of over 100 fascinating species, sourced from the archives at the Royal Botanic Gardens, Kew, The Magic of Mushrooms shows that from saving lives to expanding the mind, the potential of these fascinating organisms should not be underestimated.”

Fairy rings – circles of mushrooms that appear overnight – are among the most famous bits of fungi folklore. There’s a long chapter on them. In Britain and Ireland, tales suggest a human stepping inside such a ring will come to no good at all. Apparently a giant ring of shrooms over 1,000 years old encircles the megaliths of Stonehenge. I wonder if any tourists visiting that ancient site have actually got whisked away to fairyland in that time?

Hallucinogenic mushrooms naturally get a chapter covering their use in religous rites, shamanic practices and witches’ flying ointments among other things. The Cunning Woman’s Stillroom is a section with details on herbal cures and magical charms. There are, of course, many dangerous fungi around. History records poisoners employing them and unwary foragers meeting a grim end after eating the wrong kind. Other fungi offer huge benefits, and science is still learning about ways they can help with healing, feeding a growing population and even saving the environment.

The Magic of Mushrooms – Fungi in Folklore, Superstition and Traditional Medicine is a fascinating read and would make a beautiful gift for anyone with an interest in nature and folklore. It’s something of a companion book to Witch’s Garden, also by Sandra Lawrence, which I’d also thoroughly recommend.

You can view The Magic of Mushrooms on Amazon. It is published by Wellbeck for Kew.