After a half century, most people alive today don’t remember the Apollo missions, which landed humans on the Moon.  How wonderful to be able to see our return to the Moon, appropriately named after Apollo’s sister, the goddess Artemis!

Another Step in the Human Journey 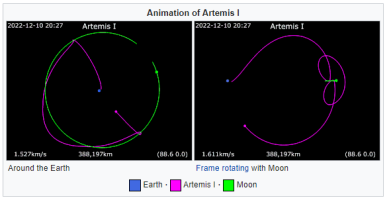 We humans have done a lot of things, plenty of good things and plenty of bad things.  While it’s common today to focus on all the bad things, I think that the many incredible achievements are breathtaking, and deserve much more attention than they often get.  One of the foremost achievements by us humans has been our landing on the Moon (and safe return!).  Even having grown up knowing about this, it’s still incredible to me that this was possible, and so much more that we accomplished it.  It’s already astounding to think that hydrogen can form higher elements through nucleosynthesis in ancient stars, giving us all the elements of the periodic table, that these starstuff elements can form compounds, including the ability to store and copy information in the DNA molecule.  From there, that billions of cells can learn to cooperate to make multicellular animals, which can develop brains able to think, and the starstuff brains can contemplate our Universe itself, yearning to explore, and finding a way to fly, then to escape Earth’s gravity, and travel literally hundreds of thousands of miles to safely land on the Moon!  To have accomplished that with 1970’s technology is pretty amazing too.  Did you know that the computational power of all the computers on the lander were together, about as powerful as the key fob you use to unlock your car?  Wow!

Artemis Launches us into the Future

Now, today, after 50 years, we are finally doing so again!  While Apollo lived up to the god’s name by successfully landing on the Moon, Artemis is not just coming for a visit, but to establish a Moon base at the South Lunar pole.  The path of the spaceship is shown here – so simple, yet so difficult.  It’s so exciting to watch every step of this adventure!  You can do so here, with the live stream.  Also, Space.com is regularly posting articles on updates, as is the NASA page for Artemis.

The highlights so are are already awesome!   Check out the view of the crescent Earth as Artemis first departs!  Then, as Earth shrinks in the distance, finally becoming distant!

Artemis will soon be on my Altar or Focus, as her victory unfolds over the next several years.  Sacred Source has a number of Artemis statues (some under the Roman name “Diana”, or as part of a group of deities), and many more can be found online from others vendors.  This goes right at the top of my Solstice gift list!! I can see a set of rituals for various events, especially the first person to set foot on the Moon for a half century (and the diversity that will bring), or the first woman to orbit the moon, and more.  What are you planning?  Will it come to you in a dream?  We have some time to plan.

That’s Earth, every human is in the frame of that photo – newly taken by Artemis!

Did you know of this before this month?  Have you been informed of this, as it developed since being planned in 200-5 (initially as the Constellation Mission)?  Was this a lead story in our news for years?  No.  I know that we have had important stuff (democracy in America was nearly lost, and is far from safe even now, after all) – but would even a few minutes every few months amid all the “reality” shows, football, and Tiktok been too hard to cover?  I don’t put all or even most of the blame on the media.  After all, this is capitalism – the media is driven by ratings, and hence they supply what they estimate people want.  I blame mostly our culture.  A culture that cares more about celebrity gossip or are unhappy that Christmas isn’t forced on everyone more than it already is than about the tremendous achievements we are accomplishing.

Can you imagine describing this one of your Ancestors from 5,000 years ago?  Even convincing her or him that the Earth is not flat, and that the Moon has no air (or even that most people really don’t have to worry where the next meal is coming from, or that some people have automatically heating houses) would be hard enough, even before the science of escape velocity or what the heck a “solar panel” is (or even electricity, for that matter)?   But no, with all that astounding wonder, even an our return to the moon gets barely a whisper in our culture, and most people won’t know it happened, if they would even care.  Still, I don’t see this as something to be discouraged about, but rather a reminder of how vital, how massively important, our work together in building a reality based culture of wonder and awe, is.

Thank you for doing your part!  I don’t have a ritual written out, but I plan to perform a short ritual when we land in 2025, and call to both our Ancestors and future generations.  Blessed be.

* Including planning and operation up to 2025, the Artemis mission (1 , 2 and 3 combined) cost each of us only $26 per year.  By comparison, Trump’s disastrous pandemic denialism cost over 400 times as much ($6,400 billion vs. $35 billion: with the total pandemic impact to the United States of around 16,000 Billion, and Trump’s denialism causing around 40% of this, 0.4 X 16,000 = 6,400 Billion).  That’s right, if Trump had simply accepted science, we could have sent literally hundreds of crewed missions to the Moon and still had money left over, as well as saved hundreds of thousands of American lives.  It’s a common anti-science tactic to pretend that these scientific wonders are expensive (usually by mentioning the total cost instead of the cost per person, because many people don’t understand the difference between a billion and a trillion), when they are not.

Starstuff, Contemplating: We are assemblages of ancient atoms forged in stars – atoms organized by history to the point of consciousness, now able to contemplate this sacred Universe of which we are a tiny, but wondrous, part.

Dr. Jon Cleland Host is a scientist who earned his PhD in materials science at Northwestern University & has conducted research at Hemlock Semiconductor and Dow Corning since 1997.  He holds eight patents and has authored over three dozen internal scientific papers and eleven papers for peer-reviewed scientific journals, including the journal Nature.  He has taught classes on biology, math, chemistry, physics and general science at Delta College and Saginaw Valley State University.  Jon grew up near Pontiac, and has been building a reality-based spirituality for over 30 years, first as a Catholic and now as a Unitarian Universalist, including collaborating with Michael Dowd and Connie Barlow to spread the awe and wonder of the Great Story of our Universe (see www.thegreatstory.org, and the blog at evolutionarytimes.org).  Jon and his wife have four sons, whom they embrace within a Universe-centered, Pagan, family spirituality.  He currently moderates the yahoo group Naturalistic Paganism.